Western Sydney’s future home of sport and entertainment is coming to life with major construction more than 70 per cent complete and installation of 30,000 seats and scoreboards set to start next.

“Western Sydney Stadium is on track to open within months – a new home to showcase our finest home grown and international sporting and international entertainment acts right here in Parramatta,” Mr Ayres said.

“This venue will revolutionise the visitor experience and ensure fans are closer to the action than any stadium in the country, all within an inviting all-year round precinct featuring green space, BBQ decks and kids playgrounds.

“The NSW Government is delivering major infrastructure which sets communities up for decades. Western Sydney Stadium is part of a multibillion dollar infrastructure spend on schools, hospitals, public transport, roads and cultural facilities.” 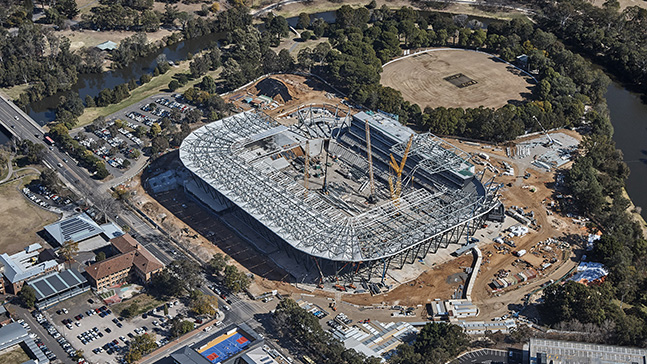 “We have poured 26,000 cubic metres of concrete, and lifted 3,300 tonnes of steel, completing the stadium’s entire concrete structure, and reaching the highest point of the stadium.”

Member for Parramatta Geoff Lee said the progress of Western Sydney Stadium is boosting confidence in the business community and wider community alike – already injecting millions of dollars into the Western Sydney economy.

“This stadium project has already created 1,200 jobs alone in the construction phase, with hundreds of additional jobs created through more than $60 million in local business contracts ranging from turf for the playing field, to concrete and steel,” Mr Lee said.